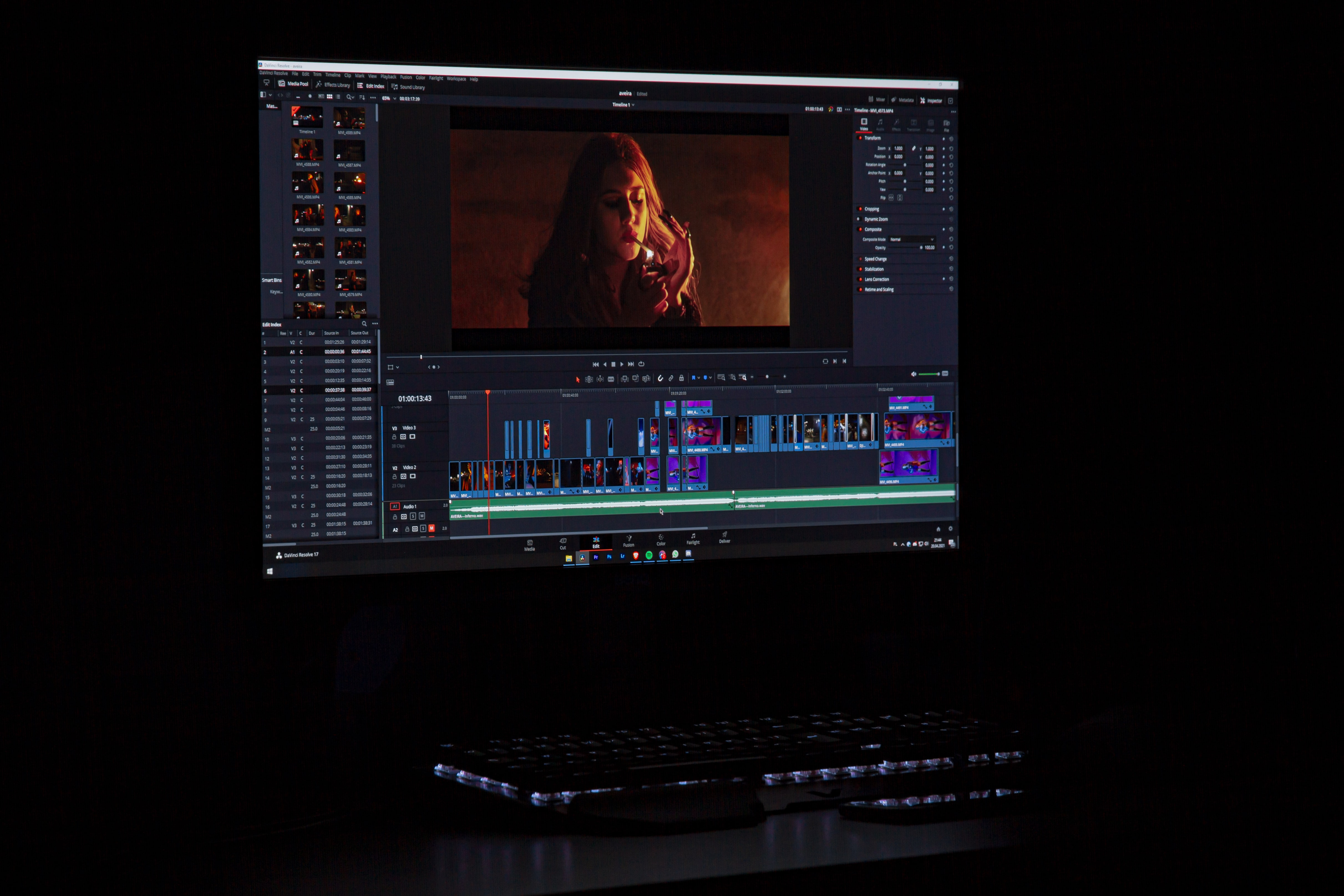 Blackmagic Design’s DaVinci Resolve Studio is one of the most complex post-production softwares out on the market, competing with the likes of Apple’s Final Cut Pro and Adobe’s Premiere Pro. The best part is that the free version of DaVinci Resolve provides users with every basic feature they’ll need to create wonderful content.

The most basic of features that every video editor and videographer needs is access to a wide array of supported formats for both video and audio. DaVinci Resolve supports many video file types when it comes to shooting and editing. It’s not just about editing though.

When it comes to exporting, choosing the proper video format and codec is usually the last step in the post-production process, and it’s important to have an understanding of each format type in order to create the best video content possible.

DaVinci Resolve supports a wide array of both video and audio formats. While these formats may seem similar on the outset, they’re all used for vastly different things. Every camera out there may shoot in a vastly different video file type from the last. There are incredibly common file formats that span multiple brands of cameras, but then there are some more obscure ones limited to specific brands.

It’s always a good idea to ensure the post-production software that you are using supports whatever file type you choose to go with.

Every video file has a file extension that is determined by the container it’s in. Think of a video container as...well...a container. It’s like a box that holds your video, audio, and all other metadata. A container is not to be confused with a codec. A video codec is the software that compresses the video during an export.

Below you will find a list of the video formats supported by DaVinci Resolve:

QuickTime is one of the most popular containers out there and hosts a slew of different video codecs. QuickTime yields a .MOV file extension type which works great for macOS devices. Videos shot using the QuickTime container are usually associated with Apple ProRes, which is Apple’s own custom video codec.

There are a lot of variations of ProRes such as ProRes 422 and ProRes 4444. QuickTime has a lot of other popular codecs as well. This includes DNxHD / DNxHR (created by Avid) and H.264.

The only issue with QuickTime is that playback on Windows devices can be a bit rocky. Users will have to install QuickTime player or some other third-party media viewer to play these files. It’s wonderful for video editing though, and DaVinci Resolve plays back QuickTime files beautifully on both macOS and Windows devices.

Mp4 is a video container that works great on Windows devices. Mp4 is limited by the number of codecs at its disposal though. Typically, most cameras will only shoot in H.264 with a rare number shooting in H.265. These are the only two codecs available for exporting in this container as well.

While Mp4 isn’t the most high-quality container, it’s very useful for content that you know is going directly to social media since the file sizes are really small.

AVI, or Audio Video Interleave, is a container with great audio fidelity. AVI was created by Microsoft and gives each video a .AVI extension type. There are a handful of cameras that shoot using AVI, including a few cameras from Canon, Nikon, and Fuji.

The codecs for AVI videos include M-JPEG and MPEG-4. For exporting in DaVinci Resolve, AVI has codec options for GoPro CineForm and Grass Valley.

.AVC is a very strange and unique file extension since it’s containerless. AVC files represent MPEG-4 or H.264 video. H.264 has a slightly higher bitrate than MPEG-4 video though, so it’s important to be able to differentiate the two.

AVC is really only used for encoding blue-ray disks to HD video streaming. It’s a rare file extension that most average users will never come across.

A DCP, or Digital Cinema Package, is pretty much only used for theatrical releases. It’s as high quality and uncompressed as you can get in the digital world. DCP video encodes and saves each frame in a JPEG-2000 format. Each DCP file needs to have a frame rate of 24 or 25 frames per second as well.

Watching a DCP file can really only be done using third-party extensions as well. On top of all of this, a DCP requires a lot of expensive equipment to bring to theatres. DaVinci Resolve has easyDCP which makes it easy to playback and export DCP video though.

MXF, or Material Exchange Format, is an incredibly large video format in a similar vein to DCP. It’s primarily used by large companies for TV Broadcasts. MXF is great because of the amount of metadata information it displays. The library of congress reports that “MXF should be seen as the digital equivalent of videotape”.

This refers to the simple, linear structure of an MXF file. Only the paid version of DaVinci Resolve (DaVinci Resolve Studio) can import MXF files. A lot of cameras recently have started allowing MXF recording. The most popular ones are Sony for their XDCAM and Panasonic for their GH line. Companies such as Canon have started to make the switch as well though.

A DPX, or Digital Picture Exchange, is a file type also known as a raster. A DPX is incredibly popular when it comes to color grading and color correction in the film industry, now adapted to support The Academy Color Encoding System and HDR (high-dynamic range).

It was actually originally created to scan film, and is still used today for this purpose. DPX is a lossless format, meaning that you won’t lose any quality when switching between apps or exporting.

A TIFF, or Tag Image File Format, is used for graphic design work and photography. They’re incredibly high-quality as well, great for retaining detail in your image. This comes at the cost of huge file sizes though which are much larger than their .JPG counterpart.

The REDCODE container is used by the company RED for their high-end cinema cameras. Viewing these files requires a special video player that you can get from RED’s site (even playback software such as Microsoft’s HEVC won’t play these files). R3D files are massive but incredibly high quality. They also shoot which is known as RED RAW which allows users to change metadata such as ISO in post-production.

Blackmagic Raw is developed by Blackmagic and runs excellently in DaVinci Resolve considering how massive and high-quality the file sizes are. Much like R3D files, BRAW required a proprietary video player that can be found on Blackmagic’s site.

Importing videos into DaVinci Resolve is a very simple process. You’ll first want to go to the media tab located at the bottom of the screen.

There are then three ways to go about importing your footage. Once there, you’ll want to click on “file” in the upper left-hand corner and then hover over “import” and click on “media’ in the drop-down menu.

You’ll then be brought to your finder or file window where you can import whatever footage you’d like. This can also be accessed by hitting ctrl + m or cmd + m on your keyboard. The other way to do this would be to drag your footage from the finder or file window into the empty space below the playback window.

What to do when you need to change video format

Now, not every editing software allows for every file type to be imported, DaVinci Resolve included. There are a few ways around this though, the most notable being a video converter.

All video converters have some sort of paid version though, so you’ll have to pay this fee if you want to convert your videos to a file format your editing software recognizes. For Windows and Mac, the best video converter is a program called VideoProc.

This program will transcode your video file into a supported video file that DaVinci Resolve can use. These aren’t the only two converters available though, so it’s best to do some research to find which program suits your needs the best.

DaVinci Resolve is the best free editing software on the market, with a plethora of file format options. It’s important to have an understanding of both containers and codecs when it comes to creating content to achieve the best result possible.

While most users will primarily be operating in QuickTime and Mp4, having an understanding of the more advanced video containers is imperative when working on larger projects, especially projects that might be getting screened on larger screens or broadcast on TV.

Remembering all of the super technical aspects of post-production can make video editing a very daunting and tiring task at times. Because of that, it’s important to leverage platforms like Simon Says to make the endeavor as easy as possible.