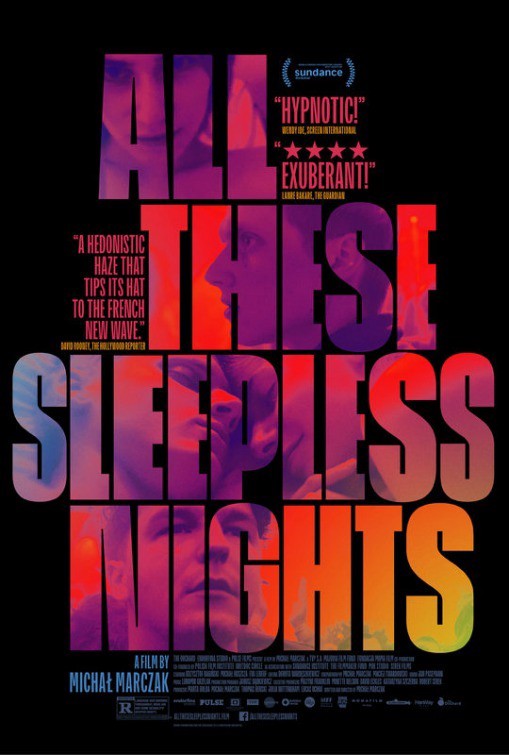 All These Sleepless Nights

The Documentary That Challenges Everything You Know About Documentaries

Documentary film often works to uncover mystery. Whether it's speaking truth to power or revealing intimate details about a public figure, the viewer typically walks away with a clearer understanding of the issue at hand. In Michal Marczak's All These Sleepless Nights, no mysteries are solved. In fact, questions are answered with more questions. And it's this approach that makes the film a startlingly unique viewing experience.

Buzz swirled around the film after Marczak won the World Cinema Documentary Directing Award at the 2016 Sundance Film Festival. He was also nominated for the Grand Jury Prize. But not all the buzz was positive. Some critics questioned the film's authenticity and speculated that its reality wasn't so real at all, in the same vein of popular reality series like The Hills or Made in Chelsea, in which producers drop their subjects into pre-staged parties and events to generate drama.

To some degree, their confusion is warranted. All These Sleepless Nights has none of the markers of a typical documentary. There's no lower third that states the subjects' names, ages, or locations. The color is drained, creating a crisp yet somber winter backdrop for the story. It's a look that feels cinematic like a feature film. The camera swirls around its subjects as though they're posing or acting. The pulsating beats of house, trap, and synth-driven electro soundtrack the movie. In the astonishing opening sequence, lead subject Krzys stands in his apartment watching a dazzling fireworks display. The scene is rich with color, drama, and ambience. It's immediately clear that this documentary has stylistic flareÔøΩ something the documentary world isn't exactly known for.

But still, it's a documentary through and through. Marczak takes us into Krzys' world. He's a Polish 20-something attempting to figure out the next stage of his life. He moves in with his best friend, Michal, and together, they spend their nights drinking, doing drugs, partying, and meeting girls. When Krzys falls for Michal's ex-girlfriend, Eva, their friendship is tested. On the surface, this sounds like standard fareÔøΩ the normal stuff that many 20-somethings go through. But there's more to the story.

There's an underlying theme of loneliness, as Michal and Krzys pontificate about companionship and life's meaning in various states of intoxication. In one scene, the two talk about how they miss sleeping next to someone. More specifically, they miss the feeling of a girl's breath on their faces while they sleep. At a party, Krzys' friend tells him that life is about dreams and goals but not people. From the opening sequence and throughout, Krzys can't shake the feeling of being alone. Even when he's with Michal, Eva, or any of his other aimless peers.

The film follows a loose narrative structure as Krzys searches for happiness. At no point do we see him work or learn or ascend. He's essentially listless, often partying through the night until sunrise. The ultimate mission of this film, to capture this period of early 20s confusion, is a lofty and abstract one. But the equally abstract approach gives it a poignant touch that may have been lost in a more traditional, cin‚àö¬©ma v‚àö¬©rit‚àö¬© approach.

What starts as a movie about wild kids evolves into a meditation on male friendship, fleeting romance, a search for purpose, and living in the moment. It's not so much about these young adults' preoccupation with all-night ragers but about their search for excitement and novelty. There's an overarching hope in all of it that their experiences, both good and bad, will make sense or at least lead them to something better.

When Krzys moves into his own apartment in the film's third act, he has a party that lasts through the night and into the afternoon the next day. One of his female guests stays until the following night. He asks her what she does for a living. "I look for what I am missing," she says. That sentiment sums up this entire film.

Despite the camerawork, the color, and the sheer glitz of this body of work, the subjects' feelings always come across as authentic. That's what makes this a fantastic, and real, documentary and an all-around superb film.